The Large Aquamaroon Felt Cat Cave is the coziest, comfiest hidey hole your cat’s heart could desire, specially made for large breeds like Maine Coon. Handmade from 100% natural wool, it’s where sweet dreams are made.

This premium wool cat cave has just two ingredients: all-natural merino wool, and love. Well, three ingredients, if you count patience, because each one is felted by hand, and that takes loads of time and care.


Your cat will adore the quality of this natural, super-fine fiber, which is deliciously soft on skin and fur. Deep Clean: Hand wash in lukewarm water, press out any excess water, re-shape while damp and leave to dry naturally.

In the U.S alone, 1.4 million homeless cats are euthanized every single year.

Here at Feltcave we donate a portion of our profits to no-kill shelters. So when you buy from us, you are helping us save cats lives.

Great product! Got as a Christmas gift for my mom’s two large cats and they LOVE it. Came with a toy mouse and a tag dangling from the opening for them to play with :-D

Like many cat owners, I've purchased multiple toys, scratching posts, and beds only to have my offerings casually rejected by the intended recipient. The feltcave bed was an instant success! I simply placed it in one of her regular sleeping spots and she moved in immediately, no introductory treats required. I bought the large size for my large-size cat (16 lbs--not a Maine Coon, not at all fat, just a big girl). I am so pleased to have finally gotten one right! 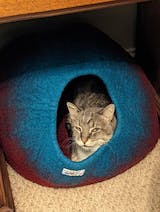 The cave was big enough for my 16 pound Maine Coons, I did not have to enlarge the opening and the cats easily fit. I only ordered one cave and have two Maine Coons however so have to order a second because one cat is very unhappy. This is highly recommended!

I love this felt cave! The fabric is soft and beautifully colored. The cave is large enough for my cat and yet, it is low enough for her to easily step in to.

My cat Pepper loves his Feltcave cat bed! He jumped in it immediately! He likes to play in there, and it's also a great place to take a nap. He's a fairly big cat and the large size is perfect for him, with a little extra room to move around in! This bed is very well made, soft, and holds its shape well. Pepper also loves to play with the toy mouse that was included. I highly recommend this bed! 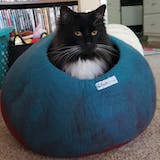 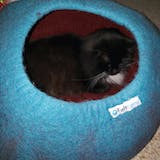 H
Heather R.
Perfect! So very worth the price!

This is the perfect cave to spoil your fur baby with!It's sturdy, it's thick, it's warm without being stuffy, and just the perfect size! My girl is 16 lbs, so I went with the large size (also because I plan to get bigger cats in the future) and she absolutely loves it. When it arrived, I set it out for her and she climbed right in without hesitation. There's even enough room for her to spin around inside when she plays with the mouse toy that was included. The color is absolutely beautiful (I got the maroon and blue one) and it's a perfect size for any space in your home. Currently I have it near the couch where I game so my cat can watch (and judge) me, haha!I know the price seems high, but you're absolutely getting your money's worth. I have no doubt this will last forever and seeing how happy it makes my cat, I'm so very glad I finally bought it.

A
Ad E.
The cats love it, but it’s hard to keep clean

You can’t wash this, only spot treat, so it’s very difficult to keep clean. We bought two - one for each cat - and had to throw out one because the cat puked on it 😬But, as the title indicates, the cats do love it and it keeps them warm. If you stick your hand in the cave to pet them you can feel a 10-ish degree warmer difference from the regular air temperature, which they love because they are always cold.

A
Amazonbuyer
One cat loves it, the other ignores it.

I have twin sister cats, with very different personalities. One loves to hide in boxes, bags and under the bed, while the other prefers always be out in the open. I barely had time to get this cat cave out of the box when Ms. Hides jumped into it and immediately sniffed every inch. Oddly, she will not sleep in this -- nor does she stay in it for very long - she literally hops in for just a few minutes, then hops out. But she does love to jump into it to play "hide and seek" ....she will see her sister begin to walk in the area of the cave, so jumps in then pops out in play attack mode when her sister gets close... which is pretty funny to watch. Ms. Hides will sleep on top of the cave, but won't sleep IN it. Her sister, Ms. Ignore It, literally took one sniff after I opened the box and walked away with a look of disdain. Other than maybe getting "body slammed" into it during their play attacks, Ms. Ignore it will not even touch the cave, much less get into it. I am going to keep it, but only because I am too lazy to go to the effort of returning it, and one of the cats does get some use out of it.